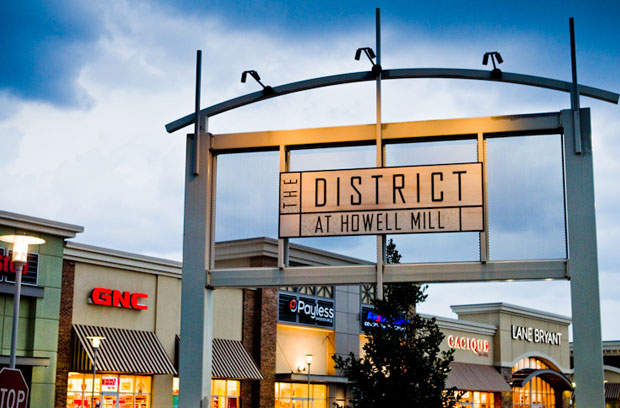 When Selig Enterprises was developing a design team to change the landscape of Berkley Park in the City of Atlanta for a new mixed-use development, they chose Urban Engineers, Inc. The site was deemed a challenge, evidenced by a previously failed concept for a Home Depot facility by the affected neighborhood association. The mixed-use concept that Selig proposed helped to ease concerns that the neighborhood association initially held by facilitating pedestrian access;  reducing vehicular flow; and, enhancing protection of the existing vegetation on this urban site.

Urban Engineers, Inc. performed the initial land survey of the Castlegate facility and developed a demolition plan to remove the abandoned and condemned structure, allowing the redevelopment to begin. Urban Engineers, Inc. overcame many obstacles in obtaining approval from the City of Atlanta due to the dense urban nature of this project and the changing storm-water regulations.

The site utilizes a concrete vault for storm-water detention designed as the central pond for both the residential and commercial developments; a vault which measures 330 feet in length; 40 feet in width; and,  11 feet in depth. It is located under the Wal-Mart parking lot. The site-permit was issued ahead of schedule, allowing the contractor to get a head-start on massive task of transforming the site into what it is today. Urban Engineers, Inc.performed the critical site layout work for the contractor, as well as the required as-built surveys, as phases were completed. This landmark project for metro-Atlanta was completed on schedule!